Laolu Senbanjo otherwise known as “Laolu NYC,” is a Nigerian bred, Brooklyn based performance and visual artist, singer, songwriter, musician, human rights lawyer, and activist. Having started his career in law, Laolu has always sought out to help others reveal their truth. To do this, he navigates in the way that comes most natural to him: through never ending depths of his artwork. After practicing law for 3 years in Nigeria, he moved to New York City where he has devoted his time to being a full time artist ever since.

Laolu is guided by the idea that all things; be it paper, walls, people, buildings, cars, you name it — are his canvas. By placing his artwork on just about any and everything he can get his hands on, Laolu seeks to leave a part of his art and Yoruba heritage wherever he goes through one canvas at time.

Laolu has worked with those such as Taraji P. Henson, Lupita Nyongo, Alicia Keys, Swizz Beats, Danielle Brooks, and has had his Sacred Art of the Ori body ritual featured on Beyoncé’s 2016 Grammy award winning “Lemonade”. Laolu has graced the covers of The New York Times alongside having features in The Fader, Vogue, Vice, CNN, BBC, and more. His ever growing list of collaborations currently include those such as Kenneth Cole, Nike, Equinox Fitness, Starbucks, Belvedere, Bvlgari, TED, and many more. 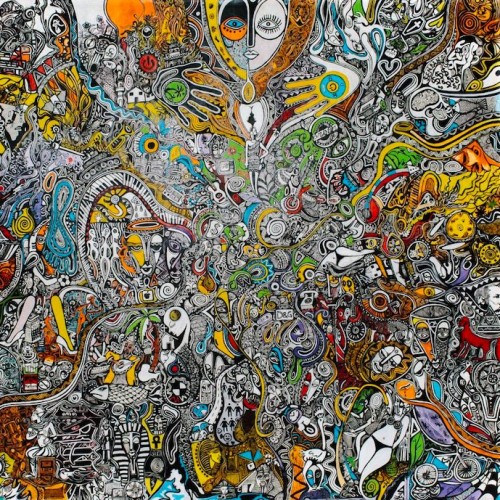 This is a mind map and the journey starts from inside the vulva in the center. The ovaries symbolized by hands and the phal- lic imagery together present an origin story that connects vividly to ideas and images of the world. Major themes include religion, war, politics, technology, Egyptology, sexuality, economics, environmental waste, media, history, music, greed and human nature. The density of thoughtful depiction and layers of meaning make this a very special work by the artist.