Vladimir Clavijo-Telepnev was born in 1962, in Moscow. In 1986 Vladimir graduated from the Moscow Academy of Graphic Arts as a graphic artist. From 1986 was a press photographer for Italian, French and Spanish editions.

In 2001 he was named “a classic of the Russian Artistic Photography” by the Moscow Photography House. 2001: recognized by the Kommersant daily as one of the two best photographers in Russia.

In 2003 Vladimir had his personal exhibition at the Russian Modern History State Central Museum.

In this project — SENSUALITE — Vladimir Clavijo-Telepnev draws a line between sensuality and explicit sexuality in depicting a woman's body. Modern photography offers two main approaches to the subject: a provocative sexuality and an impassive perception of a plastic form. As a matter of fact, aggressive approaches are increasingly predominant in taking photos of a naked body. For example, paparazzi are keen to shoot women with a candid camera in bed, bathrooms, etc.

Characteristically, Vladimir rejects using bright colors and deliberately limits himself in methods of expression. All the characters are shot sitting back to the viewer, and the sensual message is conveyed through fine outlines, plasticity of a woman's body and definite parts of the background.

In the Film Divas project, the portraits are given in the form of a definite film symbol, while Sensuality is a sort of a poster imbued with sensuality. In his portraits Vladimir uses still life elements, which are helpful in revealing the objects: a woman's back, a child sitting next to her, flowers, a hand with a string of pearls on an opened book, a branch of winter berries against the background of home-made open-work fabric.

Sensuality presents expressive and vivid images of young women. In their midst you can see a girl in a carnival mask with expensive rings on her hand as a symbol of temptation, a young woman with a child as the image of early maternity, a girls with a book reminiscent of well-known characters taking from Russian classical literature.

All the photos are monochromatic with the use made of elaborate nuances of color hues.

The series includes photo works performed in accordance with a really antique near-extinct technique called Eglomise. The technique proper was invented as early as in 13th century and centuries later, namely in the 18th century, it became known as Eglomise, after a French artist named J.-B. Glomi. He became known for his engravings on plates the downside of which was covered with gold-leaf and a thin layer of lacquer.

In the 18th century, Eglomise pieces were used to decorate furniture or, in a more general sense, as a component of the interiors in mansions and palaces. To Vladimir’s credit, in this series he has managed to smartly combine modern photographic arts and the antique technique. Indeed, traditional photographic artists put photos they shot under glass and do their best to prevent ambient interior pieces from being reflected in the glass. To this end they either use anti-glare glass or try to minimize reflection phenomenon through illumination adjustment. On the contrary, those who favor the Eglomise technique first make mirrors manually and then damage their emulsion on purpose.

The task is to create the effect of a damaged emulsion transparent enough to show a photo of a person, landscape or whatever. Eglomise-based photos have something reminiscent of spiritualistic sessions, fortune telling and everything else we associate with the magic of the mirror. Such photos are more interior friendly than their ordinary counterparts because they “absorb” the ambient space as it were. Any reflected image is integrated into the photo. In other words, the richness of the interior makes respective photos look more impressive.

Change your angle of vision and the photo you are looking at will change accordingly. 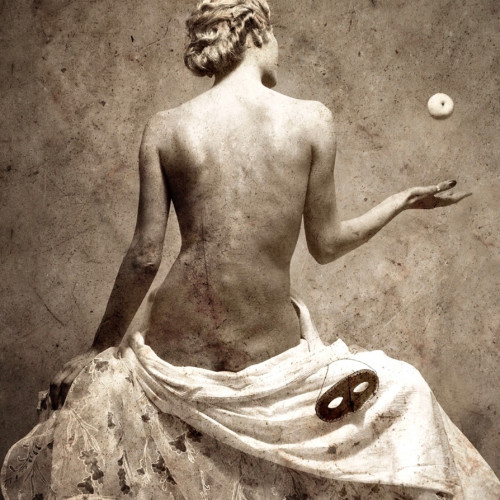 "Apple" from the famous "Sensuality" Series by Vladimir Clavijo 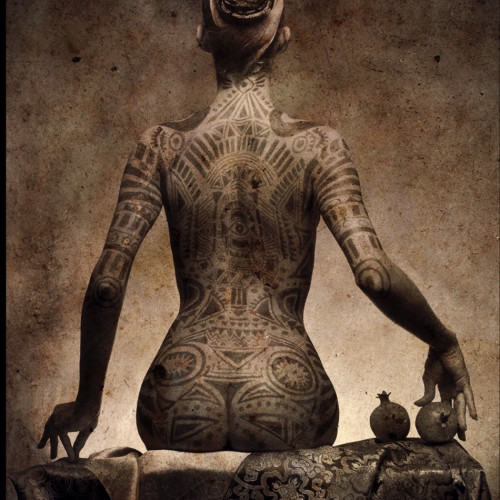 "Tattoo" from the famous "Sensuality" Series by Vladimir Clavijo 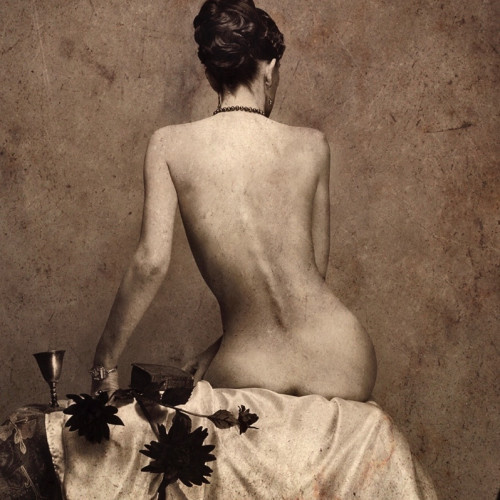 "Jurist" from the famous "Sensuality" Series by Vladimir Clavijo 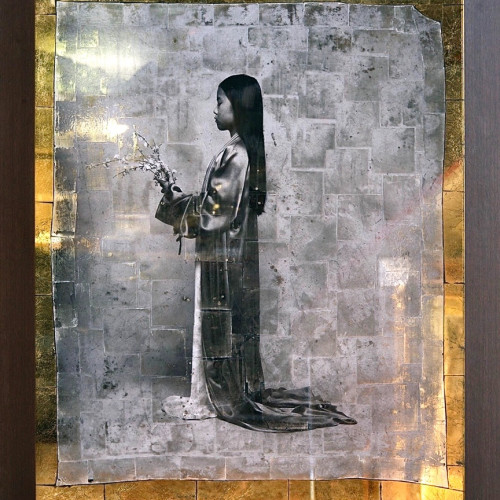 Mirror, eglomise, hand-signed by the Artist, 2004 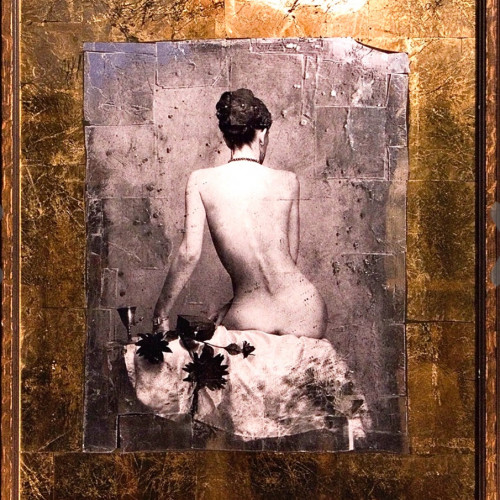 "Sensualite" from the famous "Sensuality" Series

Mirror, eglomise, hand-signed by the Artist, 2003 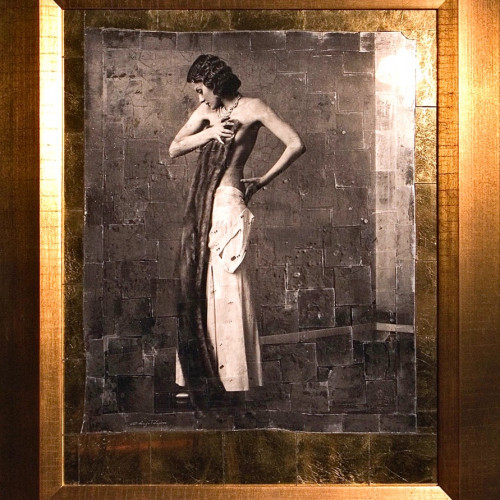 Mirror, eglomise, hand-signed by the Artist, 1997 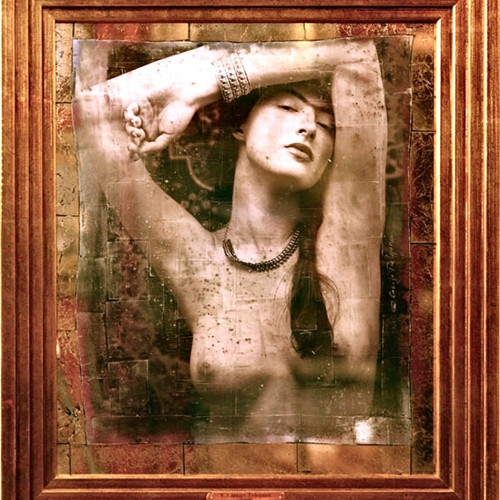 "Salome" from the famous "Sensuality" Series

Mirror, eglomise, hand-signed by the Artist, 2003 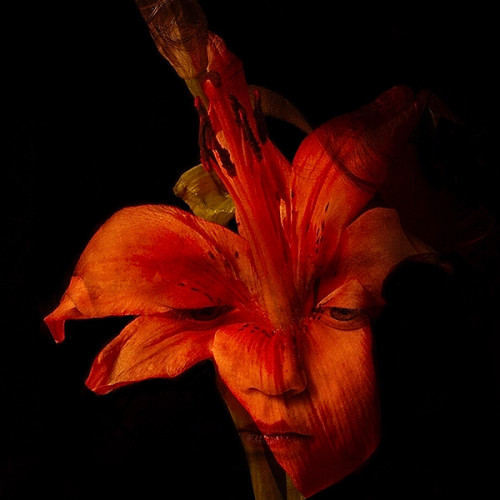 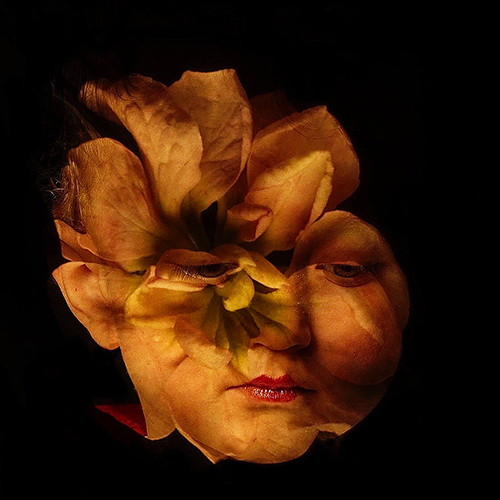